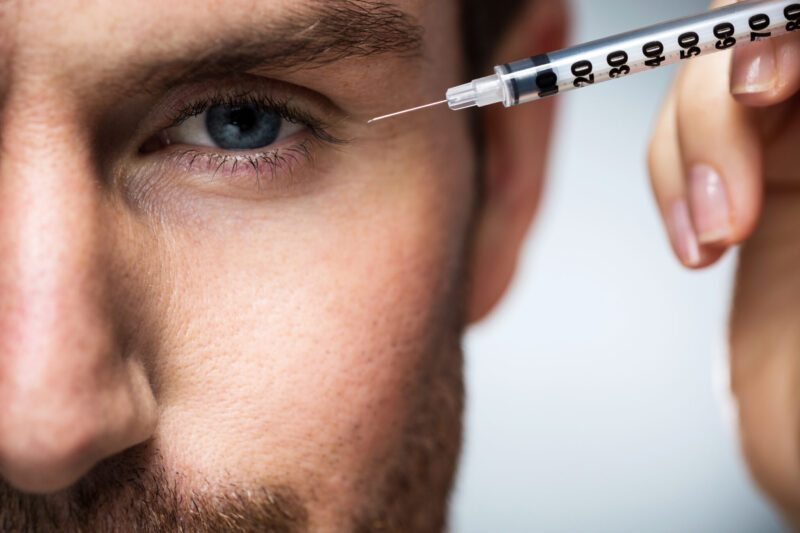 Many people want to look their best, and as people age, more wrinkles, sagging skin, and age spots begin to appear on the face. There are also some people who simply don’t like the appearance of their nose or chin. One possible solution to beauty problems is to get cosmetic surgery.

Facelifts and implants are options for some people under certain circumstances, but many people would like some of the benefits of plastic surgery without actually risking the potential complications, recovery time, and scars of traditional surgery. Below are some options for people who would like to avoid surgery but still get procedures that help them look like the best version of themselves.

Dermal Fillers for Wrinkles and Volume

As we age, there are several places that we begin to lose volume and get more wrinkles. Expression lines in the forehead, around the mouth, and around the eyes are common. Many people also see a hollowing out underneath the eyes, by the temples, and around the cheeks. We see changes in our skin over time because our bodies make less collagen as we get older.

One of the most common ways that people restore volume and lessen the appearance of wrinkles is through fillers. You might have heard of dermal fillers that are made of fat taken from other parts of the body. Harvesting and reinjecting a patient’s own fat is sometimes the appropriate option when the patient is already getting liposuction, but there are several other types of fillers that can help you look your best.

Dermal fillers can also do some things that surgery can’t do. For instance, a facelift will not restore volume to sunken cheeks.

Filler for the Nose and Chin

Many people have bulbous tips on the ends of their noses or bumps that make them unhappy with their appearance. Getting nasal surgery is one option, but if you don’t want to go through the recovery time but do want to have dramatic results in about an hour, you might choose to have fillers injected to smooth out your nose.

Some people also have a weak chin, and you can temporarily build more of a chin by injecting filler where you would usually put an implant if you had cosmetic surgery. The results of filler injections will only last for several months to a year, but a filler injection might be a good option for someone who either can’t or doesn’t want to have a full surgery.

As we age, it’s common for gravity to pull the skin down, and many people begin to see sagging jowls. There are also some people who simply don’t have a defined jawline. Getting threads is a simple procedure that only takes about an hour, requires no recovery time, and leaves no scars behind.

With this procedure, a cosmetic surgeon will use a needle to insert a barbed thread from one side of your chin to the other to tighten the skin. The MINT thread is one of the name brands that is commonly used with thread procedures.  Although the results of a thread lift aren’t permanent, one of the added benefits to getting the thread procedure is that your body will continue to produce more collagen even after the thread has dissolved.

Botox has been an effective treatment for people who want to lessen the appearance of certain lines and prevent new wrinkles from forming. Many people get lines between their eyebrows that make them look angry when they’re not, and neurotoxins, such as Botox, temporarily paralyze the muscles in the face so that wrinkles no longer form.

There is, however, another option. Dysport is a similar type of neurotoxin, and although most people report positive results about Botox, the effects of Dysport are slightly different than the effects of Botox. While Botox completely paralyzes the muscles, Dysport only weakens them so that the patient still has some ability to make facial expressions. Typically, Botox and Dysport injections last for about three to six months, and patients can go back in for treatment again once the effects have worn off.

Since collagen is so important in giving patients a youthful appearance, microneedling is an effective option for people who want to look their best. With this procedure, tiny needles are inserted into the skin, which stimulates collagen production. The microneedling procedure has several benefits. It can reduce the appearance of scars, improve the firmness and texture of the skin, and decrease pore size.

There are many beauty treatments available that don’t require healing time and can be done in the office in about an hour. When you’re looking for the right treatments for your face, or even your body, you should talk to an experienced doctor, and you should check around for references so that you find the doctor who will address your concerns.

So, What About The Body?

The body contouring marketplace is thriving and viable as well. The following are treatment which has grown substantially over the past five years:

Aging is inevitable, and we’re often born with certain facial features that we would like to slightly alter, but there are plenty of options available that will improve your face so that you can look like the best version of yourself.

This content is brought to you by James McNamara.